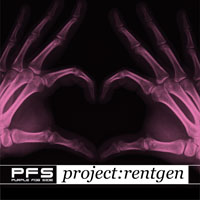 Netlabel Synthematik is proud to present the result of a unique and brave experiment under the code name “PROJECT:RENTGEN” conducted by one of Russia’s oldest and renowned gothic electro/darkwave bands PURPLE FOG SIDE.

The idea of the experiment is quite simple: to produce an album in a real-time mode with each song created and recorded from scratch within as short as two days.

The countdown started on September 21, 2009 and lasted till October 15, 2009. During the time of the experiment, the band kept on uploading a brand new track every two days for everyone to listen to. Every PFS fan could get involved into this unusual experience via interaction with the band in blogs and social networks.

Pushed to the very limits of mental, emotional, physical and creative capabilities, PFS managed to create not just an album, but work that can be undoubtedly regarded as their best to date. 10 brand new songs fully convey the band’s diverse musical spectrum, from sensual darkwave ballads to hard-hitting electro gothic tracks.

Now as the experiment is over, all the tracks have undergone remixing and mastering, which revealed a lot of new nuances to the music. The final version of “PROJECT:RENTGEN” additionally features a Russian version of “My Secret Friend” and three remixes produced by fellow musicians of Alpha Point, X-ti and Elektronnoe Oblako. Keeping to the spirit of experiment, PFS have decided to team up with Synthematik in order to make “PROJECT:RENTGEN” available for everyone as a free download.