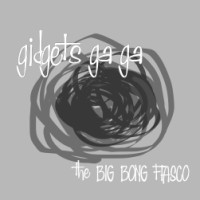 Power pop that mixes alt rock and a touch of British sound. Gidgets Ga Ga is a Chicago based band that belts out catchy power pop, alternative and rock tracks that are consistent and will keep you head bobbing for some time. The Big Bong Fiasco is filled with 18 massive punk pop songs that consists of great beats, catchy melodies and enjoyable vocals.

The band is made up of vocalist/lead guitarist Mickey Flores alongside bassist Zac Zildron as well as drummer Larry Beers. Gidgets Ga Ga has been steadily gaining an audience locally and globally. The band is described as “running on drive, heart and a belief in their own destiny.” Handclaps, catchy melodies, jangly guitars and slightly scruffy vocals, Gidgets Ga Ga certainly deserves an ounce of your time with The Big Bong Fiasco.

These Chicago natives are not afraid for their music to be identified as “pop,” where, since the advent of Britney Spears, has received a less than stellar reputation. However, Gidgets Ga Ga adds their own twist to the genre by incorporating an alternative sound that is reminiscent of the alt/rock even grunge movement of the 90s. The band is also obviously influenced by a good number of Brits. Gidgets Ga Ga are certainly considered a pro in mixing various genres and influences they have received from the past and weaving their own music out of it.

The Big Bong Fiasco is an ambitious 18 track album, that contains songs which are surprisingly likable. With opener “Beki,” the trio starts strong but if you keep listening, you’ll realize that they have more to offer. Oh, so much more. Beki is instantly likable and the type of song that triggers LSS with relative ease.

Of course, out of the massive collection, there has to be a dud in there somewhere. Although there were a few that seemed out of place in terms of the band pushing for an alternative power pop sound, most of the songs are good enough to not make you want to turn off the player completely. For instance, tracks like “Offer You Can’t Refuse” simply sounded like a Gin Blossoms song, but not in a very good way.

Gidgets Ga Ga definitely created a goldmine of tracks with The Big Bong Fiasco. Some are hits others were complete misses, but it’s good enough for a fun and relaxing afternoon drive.

This work is licensed under a Creative Commons Attribution-No Derivative Works 3.0 Unported License.