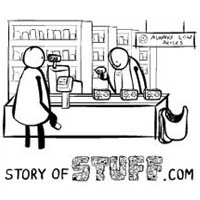 The Story of Stuff

“The Story of Stuff” is a 20-minute film that takes viewers on a very provocative and eye-opening tour of the real costs of our consumer driven culture.

In a very straightforward and open way, this short video shows viewers how from its extraction through sale, use and disposal, all the stuff in our lives affects communities at home and abroad.

Annie Leonard, an activist who has spent the past 10 years traveling the globe fighting environmental threats, narrates the Story of Stuff, delivering a rapid-fire, often humorous and always engaging story about “all our stuff—where it comes from and where it goes when we throw it away.” Leonard examines the real costs of extraction, production, distribution, consumption and disposal, and she isolates the moment in history where she says the trend of consumption mania began. The Story of Stuff examines how economic policies of the post-World War II era ushered in notions of “planned obsolescence” and “perceived obsolescence” —and how these notions are still driving much of the U.S. and global economies today.

Leonard’s inspiration for the film began as a personal musing over the question, “Where does all the stuff we buy come from, and where does it go when we throw it out?” She traveled the world in pursuit of the answer to this seemingly innocent question, and what she found along the way were some very guilty participants and their unfortunate victims.

Written by Leonard, the film was produced by Free Range Studios, the makers of other highly popular web-based films such as “The Meatrix” and “Grocery Store Wars.” Funding for the project came from the Sustainability Funders (The Funders Workgroup for Sustainable Production and Consumption) and Tides Foundation.

If the video made you think a bit more about out consumerist culture and you feel ignited to find out more, make sure to visit www.storyofstuff.com to learn more, buy a DVD in support of the project or read the news and Another Way to learn what you can do to change the way we live.