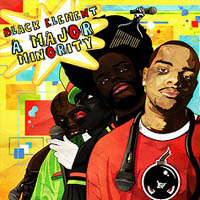 I’m truly excited to have the opportunity to introduce Black ELement and its free album A Major Minority to the FrostWire community.

I first had the chance to listen to this album last year and it went straight to my iPod because of Black ELement’s innate energetic talent to rap and to make really good hip hop. It truly stands out from the hundreds of wanna-be-rappers we’ve had to listen to in order to make our FrostWire featured picks every month.

Listening to this hip hop album reminded me of the times when I first laid my hands on albums like Dr. Dre’s, Eminem’s or Nelly’s, I kept coming back to play it over and over again. You’ll see for yourself that this album has nothing to envy from those million-dollar-per-track productions, yet we’re lucky enough that Black ELement has been open minded enough to give this album to the people for free, smartly using the Internet in his favor instead of looking at it as an enemy.

Who is Black ELement?

Black ELement is a gifted rapper and hip hop artist native from New Jersey who’s making a lot of noise on the Hip Hop Blog-sphere lately. He’s spent the last twelve years living in Boston although he often performs in New York, a place in which he feels more at home and where he plans to move back in the near future.

On an interview with Rock the dub he shares a little bit about the beginnings when he was still a teenager:

I never really took it seriously until I bought my first mic when I was 14 years old; my moms thought I had a few screws loose when I dropped 200 bucks on that shit. I performed for the first time senior year, and after that I was like its time to take this even MORE serious and then it was a wrap!

What does Black ELement think of the Internet?
Taken from the interview at Rock The Dub

The Internet is important up until a point; I think it evens the playing field for independent musicians like myself and somewhat separates the dope from the no hope. Unfortunately, there is always going to be duds who will have us all scratching our heads like, “how did he get all this press?”, but that’s expected. The most important thing about the Internet that if you are a dope artist, you have a HUGE outlet in the Internet and you can easily reach out to any of these bloggers/websites if you’re good. If you’re not “good”, pay your favorite blog some dough and he will definitely get you exposure and after enough of your so-so songs, hey kids you just might be that next Internet superstar rapper! Haha, but seriously the Internet is a gift and a curse, but the most important thing it does is it puts the power back in the hands of the people and not corporate America. So at the end of the day, skills do pay the bills.

Black ELement, as all the artists we present here at FrostClick has been reviewed absolutely for free, and he has been selected to be featured on FrostWire’s welcome screen because of his undisputed musical talents, there was absolutely no question his album had to be featured as soon as we had his permission, it was a no brainer he’s got something special going on here and we’re sure that if he keeps working hard on his music he will make it very very far.

I can appreciate there is a melodic periodicity in his rhyme styles, he is very energetic, never monotonous and the style seems to change slightly depending on the song, all of this makes it interesting and welcoming to listen to his music. Often in the beginnings of songs he will talk to the listener and share something we all can identify with.

What I enjoyed most of this album is that his background tracks are really good, the mix sounds professional, it never sounds like a 3 chord loop made by an amateur (something that seems to be the norm on the current rap underground music, what happened to good melody? Black ELement’s got it!). If you pay attention you’ll hear that songs are often mixed with clips of 70’s soul, disco, Brazilian Bossanova, I’d even dare to say some jazz and scat singing voices samples from the 40s are there, also really sticky bass lines that would make songs like Roadtrip get people to shake it and break a sweat on a dance floor. If you pay attention you’ll recognize there was a lot of work involved into making this album, from writing, to composing, to mixing, even the art album is really good (Props to whoever made the Bomb Logo).

How can I support Black ELement
When I first heard Black ELement I felt the whole world had to have a chance to listen to his music, I cannot do this without your help, here are some things you can do to help us get his music to as many people as possible.

Here are some ways you can support Black ELement if you enjoy this album.