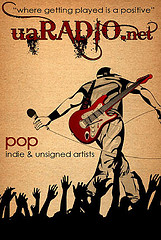 This album is a compilation of tracks from new, unsigned & independent artists featured at UARADIO.NET. Over 200 bands and independent performers from the UARADIO.NET network submitted tracks for this album. The compilation contains mainly pop tracks, some with a hint of rock, jazz or soul but most are melodic quality pop songs. This is a second torrent released by UARADIO.NET – the first featured The Best of Indie Rock. Hopefully we will see more “The Best Of…” compilations shortly – they are a great way to discover new & independent music.


Some of the bands featured on this compilation include:

Creating music is like love…first you learn to play by the rules; then you put the rules aside and play from the heart. Music now allows to soothe the savage beasts inside Fred and I…

High Tone Shelter is a 4 piece band from Atlanta GA. Their Musical style is an ecclectic mix of Rock/Soul/Reggae/funk and blues. Their music combines a solid groove, intricate musical passages, great lyrics, 3 part vocal harmonies and a very danceable vibe.

In June of 2008 I happened upon a group of on-line musicians who have changed my world – quite literally. They have taken my lyrics and turned them into full-fledged songs and I am ever so thrilled with the results. Some of my lyrics have reached No. 1 on a few different on-line music charts: Ourstage, Soundclick, Myownmusic (German website).

Canadian writer Laurier Tiernan hooking up with Berklee-schooled bassist Devin Wine and jazz veteran drummer Toru Hirasawa in the fall of 2007. They cut a demo which gets airplay on 141 radio stations. Devin leaves to start his own band and Toru returns to the world of jazz. They are replaced by Leon McCormick (of acclaimed Japanese punk band Dstolemybear) and a mysterious female drummer Gisappe.

UARADIO.NET is an internet radio station that streams music by independent artists and unsigned bands. Their station reaches audiences all over the globe and is a great way to find new independent music.