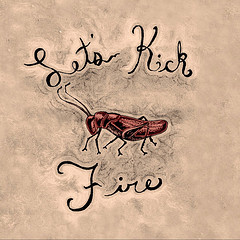 Adam McHeffey is a young folk musician from Long Island, NY. He’s been writing, composing and playing his music since middle school and developed a great ability to communicate with his audience and make them a part of the experience. He writes and sings from the heart drawing inspiration from the simple events and complex emotions of everyday life. “Let’s Kick Fire” is Adam’s debut album he recorded with the help of some of his friends over the last several months & mixed in his home studio. In the spirit of true community sharing the album is available free under a Creative Commons License.

Adam and his friends (The Kick Fire Quartet) have been playing songs from this album consistently throughout the summer in local bars & community centers and got great response from their audience. They tried to record as much as they could, but before everybody went their own way at the end of the summer, they’ve only had the drum tracks recorded. As the winter break came, they’ve gather together again and recorded the remaining pieces of the tracks. The rest came together in Adam’s basement, also known as the Overbite Record House, in January of 2009.

You’ll notice the album cover; a cricket. Like I said, we recorded the drums over the summer, in my garage, at night. When we revisited the songs, we noticed the cricket’s chirping throughout many of the drum tracks. I absolutely fell in love with the sound. It adds this summertime warmth throughout the whole album, but you can only hear it if you’re really paying attention.

We’ve asked Adam some questions about the album, his creative process and the outlook on the current music industry.

FC: What are your songs about?

The whole album is about change. I wrote the songs while a lot of different things were happening around me. Small towns growing up too fast, friends and family coming and going. There is a repeating theme about community, and it’s supported by a lot of chorus parts throughout the album, which also add to the live show when the crowd starts singing along. There is also a theme following my former fictional muse, Esmeralda. When the track Wishful Thinking On Seagrass Shoal ends, I say farewell to my muse, and hello to actuality. The remainder of the album deals keeps returning to that encounter, that realization.

FC: Do you write your own songs?

All the songs are mine. The process is always something difficult to talk about, because it’s always different. I always use a mechanical pencil and yellow legal pad. That seems to be the combination that gets my creative juices going. Usually I find chords that strike an emotion in me, and if that emotion matches something happening in my life (which seems to happen more often than you’d think!) an idea is born. The words seem to come from somewhere inside, and I don’t usually understand them myself until they are on paper.

FC: Who are your musical and non-musical influences?

My father always led a nature band called “Bees, Trees and Me.” He always put focus on audience interaction and participation. Even though those shows were geared towards children, the same tricks still seem to get the crowd going. You’ll notice a lot of sing-alongs on my record, so that’s where it comes from. My most musical influences would have to be songwriters like Billy Joel, and Bruce Springsteen, and of course Bob Dylan, for their ability to tell stories and paint scenes.

FC: What inspires you to do what you do on daily basis?

Once you play one show with a room full of people singing along to your songs, you are only hungry for more.

FC: What do you think about downloading music online?

Downloading music online is the most logical way to do it. From a sustainability standpoint, we aren’t using any paper or plastic resources. Economically, artists who can’t afford to get their music printed are able to set up an online store and distribute the music online, across continents and overseas. It’s the way of the present and the future. I think that illegal downloading is an inevitable symptom of a record industry that set itself up for failure.

I think that one day music will be communally shared, maybe a subscription to an endless library where we rent music. The idea of “owning” music will out dated.

FC: Tell us about your next shows, where and when will they take place and
why we should be there?

There will be a tour late this summer, but those dates are still very tentative. I always keep my Myspace and Reverb Nation pages updated.
But for now:

The shows get everyone involved. It’s not an indy rock band shouting at a crowd that wishes they were somewhere else. It’s a communal experience I’m giving them, not just music.