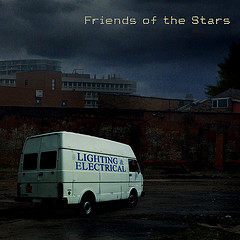 Friends of the Stars: Lighting & Electrical

Friends of the Stars is a Country/Folk band from Birmingham, UK that’s been together for more than 8 years now. They’ve released a couple of singles and brushed by some major British labels under their previous names – Buick 6 and The Toques, but their first full album – “Lighting & Electrical” – was proudly recorded and released as “Friends of the Stars”. Everybody in FOTS – Craig Hamilton, Anna Russell and Cam Do-cherty – share the singing and songwriting duties and now everybody is working together on the second album.

(..) FOTS comprises [of] a rare mix of songwriting savvy, vocal harmo-nies and honest musicianship. There’s nothing forced or flashy about FOTS – there never has been in their seven year history. There never was a need, when you can plug your guitar in, walk up to the microphone and start playing songs as good as “Old Souls” or “Been Down” or “Sharpening a Blade”.

But the album’s ten tracks tell that story better than any words on any page can. This is the first album the band have released but each song has been filtered through seven years of literally hundreds of songs, countless gigs, different line-ups, different priorities, different goals.