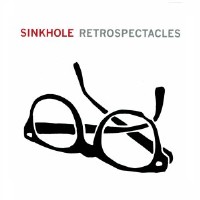 Exciting rock music that makes you wish it was the 90s all over again. Sinkhole is a band I wish I had found sooner. Retrospectacles brings with it a genuine energy that’s hard to find in most rock acts today. The guitar and drumming style is clearly lifted from the 90s workbook, and this makes the band even more endearing.

This album, Retrospectacles, is made up of 7 new tracks, lumped together with 12 previously released tracks. It is the band’s fourth full-length album and has a fast, punk rock sound with a tinge of 90s grunge.

Even though the band recorded their tracks during the mid 90s, their music is more contemporary than ever; furnishing Retrospectacles with great tracks from beginning to end. The band is made up of Thatcher Ulrich on bass/vocals, Jon Clark and Eliot Shepard on guitar/vocals, and Chris Pierce on drums.

Sinkhole specializes in fast sounds, speeding through songs and blurting out lyrics one after another. They definitely excel in their own genre and make sure they veer off the emo tinge, although emo wasn’t really as big as it was back then.

A personal favorite from the album includes Donut and Wreck on the Highway. The former is a fun song to listen to. It’s catchy and will definitely make you fall for their music; hook, line and sinker.

However, despite their good music, the band played their last show on their bassists wedding day, August 2, 1997.  The band writes:

” It’s all friendly, no hard feelings (except over that incident where Chris unintentionally sold Jon’s sister into slavery.) We’re just busy, geographically dispersed, and anxious to form new bands and cash in on the whole techno thing.”

Their past four albums included Groping for Trout, Space Freak, and Core Sample. All their albums are now available for download under creative commons.