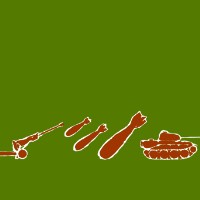 Punk rock that takes you back to the Sex Pistols heydays. Lies, Fear and Hate by Autonomadic exhibits first class punk rock. The album is almost comparable to the great Never Mind the Bollocks if only they came out back in the 70s.

Today, most people who listen to this album will just cry out and say it’s first class imitation. Coincidental or intentional imitation, these guys do a pretty good job.

Lies, Fear and Hate is filled with 20 scathing, energy driven punk rock, with a hint of underground grunge that will blow you away. Â This trio of Justin, Todd and Baker capture a sense of raw and punk energy that’s hard to spot in bands today.

Hailing from Grunge capital, Seattle, it’s no surprise that trio Autonomadics exhibit some influence from some of the best alternative grunge bands from the city. However, despite the geographical influence that they got, they were obviously heavily influenced by Brit import punk rock. Listening to Lies, Fear and Hate makes you wonder whether you made a mistake and popped in an old Sex Pistols album instead.

The growling and incomprehensible vocals is unmistakable and so are the rolling drums and upbeat sound. Lies, Fear and Sound is actually one of their earliest albums. Their most recent release, Gift of the Sun, was released last September 2009 and contains 20 bloody tracks as well.

Despite the huge collection of tracks, it’s hard to find a solo standout track that will make you go “wow.” However, it’s rare to find bands that will actually make the effort to include (and record) 20 tracks for their albums, so Autonomadics gets an A+ for that. Nevertheless, most of the tracks are fun and enjoyable to listen to anyway, so no harm done. It’s an energy filled compilation that you can easily play as a background for your pretend rockstar moments.

Among the bands that the trio cites as major influences include The Dead Kennedy’s, The Clash, the Pogues, The Pixies, Social Distortion and Screeching Weasel.

This work is licensed under a Creative Commons Attribution-NonCommercial-ShareAlike 2.5 Generic License