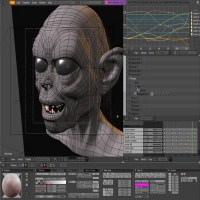 Blender is the perfect all-in one 3D modelling software. Get all the bells and whistles of a commercial animation and modeling software for ZERO dollars. Yes, as unbelievable as it sounds, Blender is an open source software under the GNU Public License.

It has become the first choice software for even professional animators and has spawned great animation films as well. Films like Big Buck Bunny and the most recent film, Sintel, were created from this groundbreaking software.

Blender provides all the things you need as you create your very own film. It addresses almost every aspect of animation film making. Several of the major categories that it offers in the program include the following:

Even if you happen to be an absolute novice and simply want to create a mini 3D animation film for  fun, Blender can help you out. The Blender Community was thoughtful enough to provide helpful tutorials that enables even the most absolute novice, use this cool program. Each tutorial shows the ins and out of the program, allowing even those with the most basic computer skills and almost zero animation knowledge create 3D models. Of course, it requires quite a bit of patience to learn the program, but it’s not impossible.

It’s quite amazing that such a program exists and that it’s being given away for free. (You can also donate to support the community.) For the most part, Blender actually outperforms several commercial animation softwares available in the market.

By downloading this software, you open yourself  up to a whole new world of possibilities in the amazing realm of computer and 3D animation.