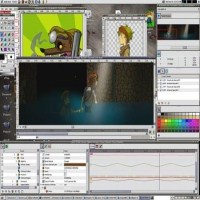 Synfig Studio might not be the simplest software to master but once you get it up and running, you’ll have a 2D animation software that rivals most of its contemporaries. The best part of all is that it’s absolutely free.

The program was created to serve as an alternative animation tool and features plenty of features essential to a 2D artists arsenal. Development of the program was spearheaded by Robert Quattlebaum, lead software engineer and founder of the now defunct, Voria Studios.

Professionals and non-professional animators will benefit from having this program. It’s a software that’s packed with features to make work easier and more polished.

Touted as an “industrial strength 2D vector-based software package,” the program provides an impressive list of features animators can take advantage of. Some of these special qualities include:

When you first open up Synfig, you’re greeted by multiple windows typical of most graphic programs. There’s the resident editing window accompanied by a dock for navigation, a time track as well as a tool palette. Although navigating through the interface and finding the right buttons to use requires a bit of a learning curve, the general layout of the interface is quite effective. Once users have moved past the “little quirks” of the interface, it becomes easy to use.

Even though lacking in certain other features like the capacity to import 3D shapes or maybe the usage of bones for animation which would have helped the program attract more users; Synfig is still a pretty solid program. Both passionate beginners and professionals will not have much trouble falling in love with this software.