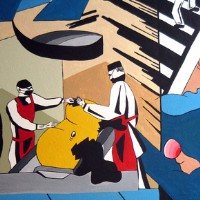 Most musicians who use the classical bass often let the tone and make of the instrument take center stage. However, with Schizo’d Bass, the instrument is subjected to different electrical devices that transform its already huge sound into something deep, mystical and at times terrifying noise.

Weird and eclectic, the sound this monstrous bass creates isn’t for everyone but it definitely shows the power of the age-old instrument in the hands of its master.

Free Juke Box is an eight-track compilation that features avant-garde instrumental aesthetics. The songs in the album vary from deeply guttural sounds to roars and screams done in the low register; making it fascinating to listen to.

Although it’s terribly hard to classify, the album relies on its utter uniqueness to charm and enchant listeners. From the title track alone, you can see how the bass sounds are extended to form this melancholic mood. It’s difficult to tell sometimes where the raw bass sound begins and the electronic devices are incorporated, but that’s part of the appeal as well.

A few other tracks to keep an ear out for include Tools and the very jungle-inspired, Hot Summer, Are You Kidding Me? Both cuts present the mastery of Guerin with his chosen instrument.

Overall, the album is perplexing and exciting at the same time. It won’t appeal to a large audience but for those who love breaking down sounds as they listen, this will be quite a treat. You can grab the download above or head over to Free Music Archive.