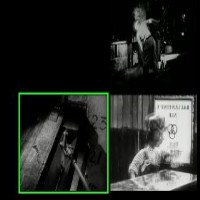 Loop Raccord (or Raccord Loop) is a cool and unique game that’s a current nominee for the upcoming 2011 IGF Nuovo Award. Developed according to the Experimental Gameplay Project’s Neverending theme, the game showcases experimental gameplay that is interesting and captivating.

The gameplay is a bit tricky to explain. Basically, you have to find the exact moment in an animated video or film and sync it with the next roll of video. Your goal is to create an infinite loop of movement by connecting every single video clip. Even though it’s a bit tricky to do, there’s no denying that it’s a lot of fun. Created by Nicolai Troshinsky, it’s one of the most original games out there. Just a word of warning though, it is a bit addictive but keep in mind that there’s really no real end to the game.

When playing Loop Raccord, you start off with one tile of video. It’s your choice when and where to start, pause, or play the clip. However, you would need to make sure that the movement syncs up or continues in the succeeding clip. Explained much better by costik on Play This Thing, “Your objective is to start it, from the right frame, at the right moment so that motion from an adjoining pane “flows” somehow into your pane in a naturalistic fashion. In other words, there’s some motion in that pane that moves toward the edge of your pane at a place where motion in your clip begins at some point, even though the clips are entirely different from one another, and you want the motion to seem to move smoothly from one pane to the next.”

You can only move on to the next level once you have managed to obtain continuous motion in all of the videos provided. There are several levels offered in the game so prepare to invest quite a bit of your time.

Although it is a bit odd to consider video splicing as a game, developer Nicolai Troshinsky has definitely created something really different and exciting. Even though it’s hard to pinpoint the exact sequence that the developer wants for the video clips, it’s surprisingly enthralling to look for the right sequences yourself.

The game is fun but there’s also pressure at getting everything to work and move properly. In the end, it’s an awesome game to try out, whether it’s the game mechanics, humor or challenge; you’ll find something to love about this game.