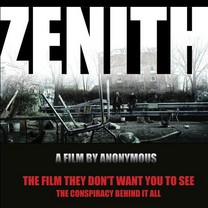 ZENITH is a retro-futuristic steam-punk thriller, about two men in two time periods, whose search for the same grand conspiracy leads them to question their own humanity.

Starting from a fictional recreation of Stanley Milgram’s Obedience to Authority experiment (see more on the experiment in Background and Influences), ZENITH plunges into following two parallel stories – of father and son – now, and 40 years into the future.

Searching for the same elusive conspiracy, both father and son find no answers; instead, their journeys unravel their lives and force them to look deep and hard at themselves and their surroundings. In the end, they are both confronted with the same Faustian bargain – but each one chooses a very different path.

“A visually stunning art-house Blade Runner for a generation in thrall to sex, violence, conspiracy, and urban tribalism…”
– Shana Nys Dambrot, Flavorpill Pick of the Week

“Visionary writer-director Vladan Nikolic… concerns and motifs [are] vivid and idiosyncratic, designed to intensify a highly contemporary concern about the loss of freedom and power of the individual to secret, manipulative cartels.”
– Kevin Thomas, LA Times

“fuses the trippy paranoia of Philip K. Dick’s novels with canny use of locations that are already a bit post-apocalyptic.”
– Steve Dollar, Wall Street Journal

The movie is currently in its release across US and Canada. Aside from downloading it free here, (via VODO), you can catch it on Netflix, on VOD platforms in over 15 million homes or buy a DVD here.

Zenith is shared here in 3 installments. Production on the Zenith three-part series is complete and Part 2 & 3 are scheduled to be released in April and May, respecively.

If you decide to donate to the project, your support goes directly to the production of the VODO exclusive “The Next Zenith Tapes”, a mini-feature set in the Zenith world. All supporters $25 or above receive credits in the next episode of Zenith, and Executive Producer credits are available at higher support levels. Check out the ‘Donate’ incentives for the full story!