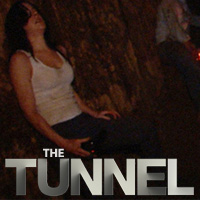 In 2007 the New South Wales government suddenly scrapped a plan to utilise the water in the disused underground train tunnels beneath Sydney. In 2008, chasing rumours of a government cover-up and urban legends surrounding the sudden backflip, investigative journalist Natasha Warner led a crew of four into the underground labyrinth. They went down into the tunnels looking for a story – until the story found them.

This is the film of their harrowing ordeal. With unprecedented access to the recently declassified tapes they shot in the claustrophobic subway tunnels, as well as a series of candid interviews with the survivors, we come face to face with the terrifying truth.

This never before seen footage takes us deep inside the tunnels bringing the darkness to life and capturing the raw fear that threatens to tear the crew apart, leaving each one of them fighting for their lives.

ABOUT THE FILMMAKERS
Distracted Media was established in 2010 by Enzo Tedeschi and Julian Harvey in order to create compelling content, regardless of the medium. After many years of working together on various projects, the like-minded pair established Distracted Media to collaborate on their ideas and develop a cutting edge Australian production company.

The Tunnel is their first feature film, produced under “The 135K Project”, born out of the belief that if we stop fighting the peer to peer networks, they could become the biggest revolution we have ever seen in the way we share entertainment and information.

After spending years being frustrated by what they saw as the movie industry’s short-sighted and conventional outlook towards the online community, they decided it was time to try something different.

So far The Tunnel has won film festival and internet media awards and managed to combine traditional distribution with peer-to-peer, currently boasting a day-and-date distribution that includes free peer-to-peer, cable television, cinema and DVD with distributors of the calibre of Transmission Films.

The Internet was meant to be a tool to connect us. It was meant to break down borders and liberate. Now we have an entire generation who are being labelled criminals for using that tool. But perhaps rather than wasting millions of dollars fighting a losing battle against internet piracy, we should try and find a way to embrace the possibilities that this new world brings. That thought that inspired this project. We believe that if we stop fighting the peer to peer networks, they could become the biggest revolution we have ever seen in the way we share entertainment and information.

After spending years being frustrated by what we saw as the movie industry – short-sighted and conventional outlook towards the online community, we decided it was time to try something different – The 135K Project was born.

We figured that movie posters and collectable frames from movies are being sold every day, so what if we could raise the money to make “The Tunnel” by selling every individual frame of it? We would be able to make a movie unencumbered by a studio. We could do what we got into the industry to do in the first place. Tell stories we like and get them out there so people could enjoy them.

What’s the key to doing that? You.

If you like the look of “The Tunnel” or the idea behind The 135K Project – buy a frame or two, blog about it, follow us on twitter, seed and embed the finished film when it’s released. Whatever you can do. It will all help and show the world there might just be another way. Who knows where that might lead?

ABOUT VODO
Powered by Bittorrent, VODO is an online film distributor designed to fund, produce and distribute cutting edge independent films and “TV” shows. Since the launch of VODO last year, run away successes like “The Lionshare”, “The Yes Men Save the World” and “Pioneer One” were brought to a collective audience of nearly 5 million people. “We’re delighted to release this new episode of Pioneer One on VODO,’ says founder Jamie King. “The success of the show proves that crowdfunding and P2P distribution can be viable models for the future. With a show like this, people can really engage with the creative process, as well as support it. We think the future lies in getting audiences to connect directly with filmmakers and play a part in the making of the show. That’s where the real value is, both for creators and audiences.’