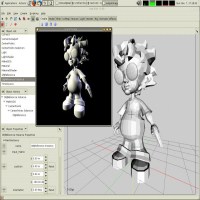 Modelling in 3D has never been simpler thanks to K-3D. This amazing software is a free program that will help you render and create 3D masterpieces. It also incorporates various helpful plugins as well as “visualization pipeline architecture”.

It was developed by Timothy Shead and released just last April 2010. So far, it’s been winning a lot of critics thanks to its useful interface and easy to use tools. It is designed for use by professional artists but even those that are still getting a feel for 3D rendering can easily use it.

As mentioned, the program is as easy to use for beginners as well as to those who are already familiar with 3D rendering engines. It incorporates an interactive tutorial system so new users can easily become familiar with the basic functions of the software. If you’re a professional, you can also create your own tutorials and share it with the community.

The software contains powerful rendering options that allow users to build an image from the ground up. There’s also an advanced undo/redo system in place so its easier to correct errors and mistakes. Moreover, “industrial-strength standards form the foundation on which K-3D builds – including native RenderMan(TM) support that integrates tightly with the K-3D user interface.”

These are just a few of what you can expect from K-3D. In fact, it contains a great number of features that most users will appreciate. It is available as a free download and works on almost any platform.