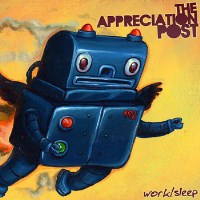 With a penchant for power pop and synth punk beats, The Appreciation Post is bringing in tons of energy with their upbeat sound. The band has been around since 2005 sharing the stage with awesome acts such as Smoking Popes, Mayday Parade, and Anberlin to name a few.

Work/Sleep is the third release from the crew and hauls in power pop into play. Armed with catchy beats and tongue-in-cheek lyrics, it’s a compilation that can easily become a staple in any college punk rockers room.

A blend of synths and pop beats pretty much sums up this 7-track EP. With a total run time of under 20 minutes, the record breezes through one track after another in a flurry of rushed guitars and power pop vocals. Now, when listening to the record it can either go one of two ways. You’ll either love it because of its catchy pop punk songs or you’ll dislike it because it’s your typical pop punk compilation.

Take a listen to The Beating of a Lifetime and you’ll get a pretty good idea whether this EP is to your liking or not. The song is a sarcastic response to scathing, negative comments. It’s also filled with the tried and true pop punk formula of drum opening, schoolboy vocals, synths and guitars. The rest of the tracks also feature the same formula, with very slight variations here and there.

For some, the record might be just a little too typical for their taste. Personally, I like some of the songs in the album, particularly the opening track as well as the heavier and chanty, Better My Future. Sure, they might sound like any other aspiring punk pop band out there but that’s what makes this record fun as well. You can play the EP, just relax and enjoy; no need for heavy thinking and scrutinizing. Besides, the recording quality is pretty good. Take a listen.

Like what you hear? Check out The Appreciation Post’s previous records which include, Brighter Sides (2006) and Leftovers (2010). The latter was produced by Marc McClusky who’s worked with bands like Bad Religion and even indie favorite, Weezer.