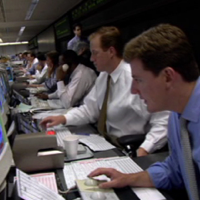 “Code Rush” is a 1998 documentary directed by David Winton. It follows the lives of a group of Netscape engineers in Silicon Valley as they struggle to save their company from impending financial doom. The film shows them spending sleepless night after sleepless night, forsaking their family and friends while they labor to release the open-source code of Mozilla, which one of today’s most popular browsers, Firefox, is based on. Netscape was also on the verge of being taken over by AOL, a company that even geeks do not find cool.

The documentary was shot from March 1998 to April 1999, with hundreds of hours of footage detailing the daily lives of Mozilla employees. Back then everybody thought Microsoft has won the battle for the user’s desktop Internet browser and Silicon Valley companies were slowly sinking into ruin in the years leading to the bursting of the dot com bubble. In the end, Netscape succeeded in carving itself a place in Internet and software history, even though the people behind it were up against impossible challenges at that time.

“Code Rush” was shown on PBS on March 2000 (which, ironically, was shortly before the dot com collapse). It is currently out-of-print and isn’t available on DVD, but everyone involved has given their permission for it to be released for free here. There are several ways to download the documentary so just pick one with the most seeds. It changes sporadically.