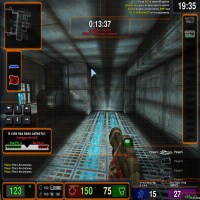 A direct successor of the Nexuiz Project, Xonotic is a free, open source (GPL) shooter game that serves as the updated and much improved version of the former. After internal disagreements plagued the Nexuiz Project, several developers took a stand and vowed to remake the game from scratch. Creating one that’s even better and ensuring that it’ll remain free with an open source license.
The game was created by a team of “players, developers, and artists who enjoy learning and refining their skills through contribution and collaboration with other players from around the globe.” Thanks to this effort, this forked version features much of what gamers could hope for. With stunning graphics, engaging gameplay, great maps and a host of other features; Xonotic is slowly shaping up to becoming an excellent game.

Although the developers are still working on completing the entire game, their release of a 0.5 version is a great teaser for showcasing just how far the game has improved. Among the upgrades include a multi-language support which allows easy translation into languages such as German, Spanish, French, Italian and more.

It carries more maps, seven new ones to be specific. As for the older ones, these were tweaked and updated with more details added to ensure better gameplay. More vehicles and weapons are also incorporated to make the game more interesting. Player balance is also improved, ditching the dodgy and unstable Nexuiz gameplay. Plus, there’s a whole list of technical upgrades done to the game as well. You can check out more info right on their website. Judging from these improvements, they’re definitely looking to turn this into a standout affair that both hardcore gamers and developers will enjoy.

As of the moment, there are still a few bugs here and there but you can give it a try. It’s fast paced, free and works on all three major operating systems: Mac, Linux and Windows. Try it out.