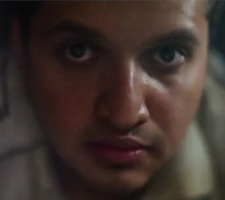 Whether it’s a coffee break or a quick nap, cancel whatever you’re doing and watch the adrenaline-filled, blood-pumping Extranjero.

Shot in just over two days, Extranjero is the first ever winner of the Sundance London Film and Music Festival. It tells the story of refugee running from his past as well as the confusion in his own mind. It’s directed by former flat mates Daniel Lumb and Crinan Campbell better known as The Queen.

With just five minutes of runtime, this experimental short film offers an alternate perspective on the issue of migration. It’s a remarkable story, which, on some deeper level gets the message across. The greatest part of it is that it touches a big societal concern that many of us are aware of in the present.

There are a lot of dramatically and visually sumptuous scenes that offer an alternate perspective on an imperative issue. I personally admire Evan Reguiera’s (refugee) acting skills. Though he doesn’t have any lines, he gave his character justice portraying the perfect emotion at the right time.

All in all, Extranjero is a dynamically directed and superbly acted film that marks a new dawn on short film making. It’s a richly deserved spectacle well-worth all the praise and award.