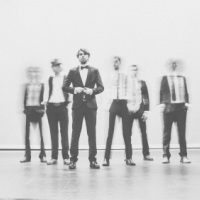 The Dirty Guv’nahs: Hearts on Fire

Revamp your playlist with some fresh rock Americana crafted by the six-piece brotherhood from Knoxville, Tennessee—The Dirty Guv’nahs. Independently released in March 2014, Hearts on Fire is a big stepping stone for what Boston Globe refers to as “a fiercely soulful band.” The hefty eleven-track collection made waves as it hit no.1 on the Billboard New Artist Chart, a feat only a few newcomers can achieve.

After the major break on the charts, the band followed it up with a sold-out spring tour and an announcement for their Chasing Forever Fall Tour. The Dirty Guv’nahs are James Trimbl, Justin Hoskins, Aaron Hoskins, Cozmo Holloway, Michael Jenkins, and Kevin Hyfantis.

The groundbreaking album kicks off with Where We Stand. An extremely accessible rock piece that utilizes hand-clapping tempo and tight songwriting. The track imbibes ‘grown up’ rock to its tune, as it plays with subtlety and quality melodies that builds on you in every listen.

A more upbeat piece, Morning Light is that kind of song that preps you up to face your day. With funky electric guitar and soul undertones, this is an entertaining listen that brings the blend of jazz and rock into center stage.

Slow Down Easy on the other hand decelerates the uptempo ambiance with soulful yet robust vocals set on straight-up, honest Americana rock without the frills. If you’re looking for something to relax while enjoying a glass of whiskey, then this is the right song for you.

In Hearts on Fire, The Dirty Guv’nahs really surprises everyone by polishing a familiar territory like Americana rock and giving it a fresh new sound that’s elegant, soulful, and at the same time, appeals to the listener’s emotion.