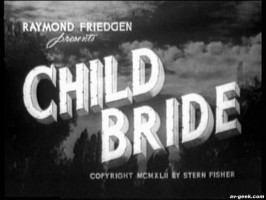 Child Bride is a 1938 full feature movie with a message; something that might appear quite disturbing now, yet was more than relevant in the rural communities of its time. As one of the more hard-hitting movies it explores the practice of older men marrying teen and pre-teen girls.

Produced by Raymond L. Friedgen and directed by Harry Revier, the film is very nicely crafted, with Revier touching on the subject matter in an excellent manner.

Child Bride is set in the remote town of Ozarks with a teacher named Miss Carol who is hell bent on stopping the practice of older men marrying teen and pre-teen girls. Her crusade soon raises the ire and brings about the wrath of the local men. There is blackmail, attempted murder, and plenty of action to satisfy your senses.

The film has also a quite unusual selling point; a topless and prolonged nude swim scene with a 12 year-old Jenie. The producer and director were hugely criticized because of this and seen many regional releases of the film ban it from the screen. The scene was not in good taste for many, specially due to the voyeuristic act carried out by the character of Jake Bolby, yet some were quick to point out that it was exactly what made them remember the movie and served as an effective way of getting across to the audience when it comes to bringing the issue to light.

With multiple mixed reviews, this film cannot be judged as good or bad, but will surely appeal to film-bluffs concerned with hard-hitting films. With a run-time just more than an hour, it is worth the time invested.