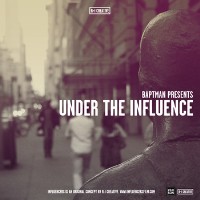 Baptman: Under The Influence

Serving as a mixtape for the indie film, Influencers; Baptman’s Under the Influence serves as a beautiful gateway to the film and its idealogy.

The film discusses how trends today are easily spread and digested, whether its in fashion, music or entertainment.

Taking this premise, Baptman infuses his sound with beautiful electronica, hip hop, jazz, indie and even rock elements while also sprinkling inspiring lyrics here and there.As mentioned, the film, The Influencers explores the real meaning of being an “influencer.” It dissects how trends in music, fashion and general creativity trickle down to affect others. It breaks down (in a non statistical manner) what makes a person a proponent of these trends and becoming a strong influence among peers and other people.

True to its exploration of creativity in the subject matter, the film documentary is a collection of interviews and Polaroid snapshots of some of the best influencers from various generations. It’s a short but profound piece that creatives would definitely enjoy.

The album, on the other hand, is a laid-back hip hop, jazz compilation interspersed with encouraging spoken tidbits. After seeing the mini-film, there’s no doubt that the record hits the nail on the head. You’ll hear great beats from Gaston, J.Cole, Miike Snow (Mark Ronson Remix, and Aloe Blacc to name a few.

It’s a record worth checking out even if you never hit play on the documentary. It’s a terrific record that manages to stand on its own. You can mosey on over to BandCamp to grab the free download. Enjoy!