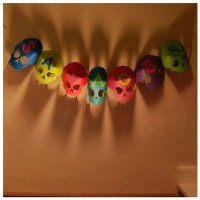 From the first few seconds of Savages, you’ll realize you have a special compilation in your hands.

If you’re all for beautiful indie folk rock with a touch of alternative, the Bonesetters might become your new favorite band.

The five-piece hails from Muncie, Indiana and creates music that, as they put it “are meant for dreams.” Indeed, with a sound that fuses together elements of swing, folk, surf rock and blues; you can expect tons of catchy and easily likable tunes up ahead.

The Bonesetters is one of those bands that leave a sweet taste in your mouth; keeping you coming back for more. Their tracks have that special mix of fun swing rhythms, raw indie rock beats and surf rock appeal that altogether create a highly enjoyable sound.

Savages, the album, clearly showcases this genius. Opening with the title track itself; listeners are greeted with beautiful folk harmonies for the first few seconds before transforming into a flurry of guitars and drums. The pace steadies as the lyrics are introduced, all the while the rhythm join in the fun. A great opening track that stamps the band’s signature onto the listener’s ear.

From beginning to end, the album is filled with one solid track after another. The group doesn’t dilly dally around, putting in filler tracks, instead they make sure each cut stands by itself. You hear one of these as a single and you’ll still like it. Cuts like Xanax, Jesus, and Mushroom Clouds Aloft perfectly showcases the band’s range. From quiet to loud, these guys can transition and comfortably fill in various genres with ease.

After all the drama of the record almost never being released when Mossback Records closed, it’s such a relief that the album eventually got greenlighted. It would have been a shame if such great music like this were kept hidden. It’s a record oozing with great charm that’s difficult to find in new releases. This is worth every single byte in your hard drive so make sure to grab it.