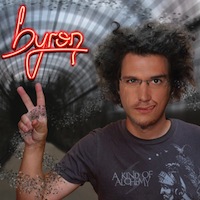 Byron: A Kind of Alchemy

Just like two incompatible elements being brought together to turn into gold, A Kind of Alchemy is a treasure for alternative rock listeners. The album boasts two dominating elements: the madness and the zen.

The Night started out in a mellow mood, but as the song continues, the sudden exuberance gives out the entire mood of the album. The vocals is distinctively moody as it tends to lean on to the blues. The last part of the song returns to its moody but more endearing end. Progressive, with instruments effectively creating a flux, The Night is an engaging fusion of blues and alternative rock.

Funky beats, progressive, and exciting, Diggin’ a Hole is the “madness”. The versatility of the vocals from the blues towards the funk, Byron expertly change the lanes with no difficulty. Playful lyrics, and a bit crazy melodies, Diggin’ a Hole is an epically down-to-earth track.

Alternative rock returns in this track. A Little Bit Deranged is a melancholy of sorts. Its low-pitch but deep vocals complemented with the sounds of flute that accompanies the guitars, melodica and others. Lyrics are full of contradictions but are wisely put together to create this ‘a little bit deranged’ of a track.

Full-blast alternative rock, with awesome drums and Byron’s signature deep vocals, The Song That Never Was is a brilliantly powerful track. Byron and 6fingers’ music collaboration is a good choice, as the lyrics and music itself is strikingly good treat for alternative rockers out there. It is dramatic, as it climax ins to more of rock than the usual blues.

A Kind of Alchemy is composed of fourteen tracks that ranged from intense to nocturnal elements. There are other notable tracks that also deserves your attention such as War, Sirens, and I Don’t Want to Entertain You.

The album’s powerful fusion of blues, alternative rock, and funk makes A Kind of Alchemy worth of your time.