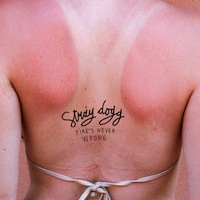 Hang out by the pool and strut those tan lines while listening to Stray Dogg‘s Fire’s Never Wrong. This 2012 release from the band features nine tracks that jumps over fences of indie folk and Americana.

The band describes their music as “melancholic indie-folk”, which is greatly evident in its first track Disappear. Here, hushed acoustic vocals welcomes the ears to a good start. Fleets of solo guitar adds texture to the sustained, soft strings. Dukat Stray’s crisp vocals are highlighted in this track. Listen as he sings his heart out with flair and the right amount of vocal discipline.

Following with some intricate guitar plucking is Don’t Go. Armed with a relaxing violin solo blended that perfectly blends well with charming folk musings, this piece is a great way to soothe the nerves and mend a broken spirit.

Closing the album is Whisper, a sublime and pristine peace that lets each of its melody to twirl and softly linger to the ears.

Fire’s Never Wrong triumphs in its ability to soothe the senses through well-penned lines and genius arrangement. It is a thematically calming collection that explores and exhausts each possible aspect of its chosen genres, delivering hand-picked melodies that are both fresh and accessible.