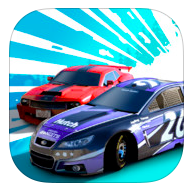 Smash Bandits Racing from Hutch Games goes the other route that the company’s other game, Smash Copts took. Instead of the cops you’re now behind the wheels as a criminal who’ll destroy anything in his path. That’s right, the goal is to destroy everything in sight, and it’s a lot of fun.

The game setup finds you providing entertainment for the TV folks (think reality TV) where your show’s ratings determine your score. There’s nothing really here much in the way of a plot or storyline and that’s good because you can just focus on smashing things in your way.

Smash Bandits Racing has some very responsive controls and is perfectly suited for a touchscreen device. At the bottom of the screen is information for controlling your car. You just need to touch that part of your display to move the vehicle left or right and accelerate.

Other functions are context sensitive and they’re very responsive and that’s necessary for this kind of game. Even if you have never played this game before, it won’t take long before you learn how to powerslide effectively. Your objective in Smash Bandits Racing is to not just smash things but also get as far as you can without being caught by the cops.

Given everything that’s happening, Smash Bandits Racing can be quite hectic, but it won’t take long before you are able to get the hang of smashing things and evading the cops at the same time. Overall, Smash Bandits Racing is a very enjoyable game and one that you won’t mind playing over and over.