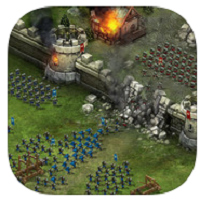 Throne Rush is a resource management and strategy game that will test your mettle like never before. The title, developed by Progrestar, began as a browser game but has become so popular that versions for the iOS and Android are now available, plus there are new features included.

One of the game’s strongest points is that it allows players to play anywhere they want as you can sync Facebook with Android or the iOS. In addition, Throne Rush has numerous re-balancing elements that have a profound effect on rewards, troops and structures.

However, the basic gameplay in Throne Rush is still the same so there’s no need to worry you have a steep learning curve. At heart this is still a strategy game where you and competing players need to construct a medieval town and build up an army. Once your army is ready you can go out and attack other towns controlled by the AI or by other human players.

Throne Rush also has an extensive campaign mode where you go up against the environment. This is one of the most challenging aspects of the game as the towns here are protected and have more resources. You also can’t just focus on attacking as you also have to manage your resources and upgrade whenever you can.

During quests in Throne Rush, you can earn rubies which you can use to purchase troops and improve your town’s structures. Overall, Throne Rush is an exciting strategy game that will keep you hooked. It’s not like your typical RTS game as there are plenty of challenges here.