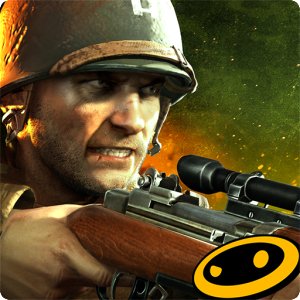 Frontline Commando: WW2 from Glu Games may look like just another shooter, but it differs in many respects, mainly concerning how easy it is to control and the amount of variety in each of the levels. The game is set in the Battle of the Bulge during World War II, but even if you don’t know your history, you’re still going to enjoy the game.

Frontline Commando WW2 is divided into three areas: you start at Ardennes then Germany and Italy. The chronology of events isn’t historically accurate, but this isn’t meant to be a realistic simulation anyway. What’s important here is the action and you get plenty of it.

The action is fast and furious, and you’ll be shooting not just at the enemy but also blowing up cars with bazookas and rockets. You’ll be assigned to do specific missions and you’ll be using specific weapons like the aforementioned bazookas and rockets plus machine guns, and you can collect currency from these missions and get newer and better weapons.

Apart from these weapons specific task there are also the main missions where you get to use a lot more equipment. There’s a good amount of variety here and some of the missions are quite short, which is good for casual gamers. However, there are more complex and longer missions available too.

If you’re into WW2 shooters then you’re going to love Frontline Commando WW2. It’s not exactly a revolutionary game but it’s an engrossing title all the same. There’s plenty of action and it’s as good a third person shooter as any.