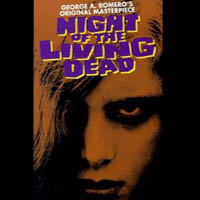 The Shining, The Exorcist and The Omen are all films that owe some of their stylistic approach to this film. This is the film that re-wrote the rules of the horror genre as it went along, whilst acting as both social critique and fond homage to ‘The Birds’ as well.

Romero set in place a steady breakdown of all our assumptions of the horror film, which he then utilised to full effect through the rest of this film and the two superb sequels that followed.

This is perhaps one of the greatest low budget cult movies ever made, certainly one of the most influential, and in its brutally harrowing documentary style conclusion a harsh statement on American racial attitudes. A statement which is as relevant today as it was over thirty years ago.

Night of the Living Dead [1968] on Wikipedia