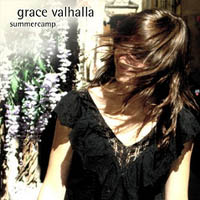 Grace Valhalla is a very talented young female composer from France. She has been producing music on her home computer for good few years now and “summerCamp” is her fourth album. Listening to all four, you can clearly hear her sound maturing and becoming more professional, but because the albums are so different it is hard to say which is really better. The first of Grace Valhalla’s albums, “psychopathethic”, is more a rock album, while the second, “PEAK~” is clearly electronic. “Wire”, her third album is a mix between the first two, and just like the previous ones contains some melancholic and calm music.

“summerCamp” has more of a pop feel to it. “You’ll find many analog sounds, 8bit sounds and guitars in this album. I wanted something warm, a soft music of summer; the summer is over now, but I hope this album will remind us of its memory, and extends it a little longer”, says Grace Valhalla.