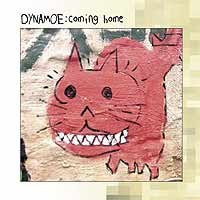 Dynamoe is quite a unique electronica band from Denmark. They’ve met almost by accident in 1997, when both Giovanni Campagna and Dennis Lee were signed by the same label. After a long chat, they’ve discovered they have so many ideas in common that working together was almost a given… They’ve recorded three singles under a Belgian label R&S Records and ultimately released their first record “Jump Start” in 2001 under sub label Apollo. Both the singles and the album were very well reviewed by the press and the music industry, so the duo, with their supporting musicians, went immediately back to work. “Coming Home” is the band’s second album and it was ready for press in December of 2003. In 2007, Dynamoe has released their latest recording, “In the Wake of Time”, and all three are now available for donation/free download at www.dynamoe.com.

Dynamoe music comes in a form of an exceptionally well blended mix of electronic and live sounds. Giovanni and Dennis are experienced producers whom, with the aid of their programming skills and the use of additional musicians, create a hybrid of warm resonances, disharmonic ambience all wrapped up with slow groovy beats and soulful vocals.

“Coming Home” is a beautiful mixture of downbeat, electronica, chill out, jazz and funk. The album features a variety of great vocalists and musicians including the UK Jazz vocalist Liz Wilson & Joy Morgan-one of Denmark’s up and coming soul singers. One of the songs on this album – “In Your Own Time” – was remixed by Will Holland of Quantic Soul Orchestra and made a big hit in European clubs a couple of years ago.

Make sure to listen to all three albums!