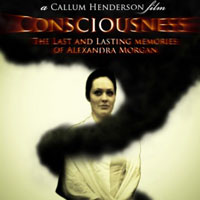 Consciousness: The Last and Lasting Memories of Alexandra Morgan by Callum Henderson

Consciousness: The Last and Lasting Memories of Alexandra Morgan is a dark and haunting, award-winning short film that was written, directed, shot, and edited by Callum Henderson. Callum says the film’s concept had been “loosely inspired” by Edgar Allen Poe’s “The Facts in the Case of M. Valdemar.”

Alexandra Morgan curiously wakes up alone in the middle of a vast postcard-perfect garden, completely clueless of what is going on and how she got there. She sees a familiar face, begins to call her name, and then she chases after her slowly realizing they seem to be moving in different realms.

The film unfolds, and it becomes clear that the images are all coming from Alexandra’s subconscious mind. She is exploring her memories, progressively moving within, and even beyond, what her consciousness could reach. In the end, she arrives at a seriously maddening realization about the truth in her predicament.

Henderson’s cast is composed of family and friends, and each one rendered an impressive portrayal of their uncanny roles in this provocative short film. Whatever the cast lacked in nuances, Henderson more than made up for it with his stunning images and direction. It must be said, however, that the most fantastic portrayal goes to Rachel Cleary as the creepy Nurse Reynolds.

Consciousness won the Best Script and Concept recognition at the Cinemagic UK & Ireland, and the most coveted award for Best Short Film at the Foyle Film Festival, both in 2009. It also won the Daily Deviant Short Film Award on June 21, 2009.