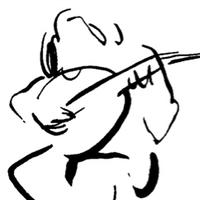 As I was listening to this free and legal seasonal album by guitarist James Edwards, my wife shouted from the other room, “Is That Julian Bream?” I doubt if I can come up with a higher compliment. While Edwards may not be Bream, he is still an accomplished guitarist.

Beautifully played and easy on the ears, this is a highly recommended download for your seasonal music collection.

Classical guitarist James Edwards has been a performer, teacher, and recording artist for over 25 years. He not only plays the rich and varied traditional repertoire, but his own compositions and contemporary styles as well. James also plays historical instruments of the Renaissance and Baroque periods such as the five-course guitar and ten course lute.

Mr. Edwards’ many compact disc recordings feature his arrangements of American, Spanish, and European classics. Many of these have been published by Mel Bay Pub. in several books currently available.

In addition to the traditional classical guitar repertoire, James performs his own vibrant arrangements of Handel, Mozart, Puccini, Debussy, Brahms, and many other works by the great composers. He also has created a unique American repertoire with treatments of well known works by Gershwin, Rodgers, Joplin, etc., along with his original compositions; blending his classical background with the earlier influences of folk and jazz.

This work is licensed under a Creative Commons Attribution-Noncommercial-Share Alike 3.0 Unported License and it’s available as a free download from Jamendo.com.