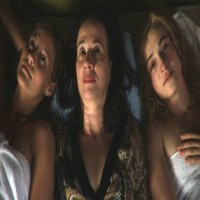 Three people wake up in a hotel room, not knowing who they are, how they got there and why. Point of Departure is an interesting film from German based independent film outfit, Retsina Films.

The film follows the three main characters in trying to figure out where they are and who they are. The intrigue of how they lived their lives and why they ended up in an unknown place is part of the intrigue that surrounds the film. Point of Departure is one out of several low-budget independent films produced by Berlin/Germany based film making group, Retsina Films. The company has produced several shorts including The Immortals which follows three people who are leading double lives.

As for Point of Departure, the film that follows three people who wake up in a hotel bed together. None of them seem to know each other or even have the faintest idea why how they got there. They struggle to find a way out but it seems something always comes up blocking them and diverting them. In the end, each characters is enlightened with a new perspective of who they are and are never the same again.

Although the cast is relatively unknown and the budget is small, the film presents an intriguing concept. The film stars Mit Klara Höfels, Luisa Buzasi, Henriette Heinze, Matthias Merkle, Mario Aperdannier, Manuel Edler & Adrian Scholz; and it is released under a creative commons license.

This work is licensed under a Creative Commons Attribution-NonCommercial-ShareAlike 3.0 Germany License.