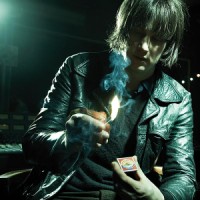 British rock and American psychedelia rolled into one. If at some point you fell in love with the Verve or any 90s Brit rock band during the Oasis era, then you might find The Heavens a real treat. The band infuses their music with bits and pieces of rock, alternative, psychedelia and indie rock making every listener think twice whether it’s really 2010 not 1998.

Their self-titled EP has been hailed positively by various critics and reviewers. In fact, one writer even went on to say that “their 4-track demo is better than most current bands’ singles.” I must agree, so why not give the tracks a listen and be the judge.

The Heavens is fronted by singer and guitar player, Richard Green. Green used to share face time for popular Brit indie band, Ultrasound, and was the main guitarist for the group. For The Heavens, Green is joined by Robert Simpson on organ,  Steve Ward on bass and Dave Fairbrother on drums.

Their self-titled demo composes 4 tracks that ring true to British psychedelic rock. Opener, Second Day Blues, for instance, consists of traditional jangly guitars along with hints of a progressive sound peeking through. The incorporation of the organ work and layered vocals make for a dreamy escape. Meanwhile, Echo Arena, is easily a favorite with its grandiose sound. The alluring controlled feedback makes the song relaxing in rockish sort of way. The refrain is sung along with beautiful rhythm and melody.

The Heavens have spent much of 2009 touring and doing shows around the UK. If you happen to be in the area, you can expect to see them at the Bradford Mela Festival at Peel Park. They are set to headline the show on June 13 2010.