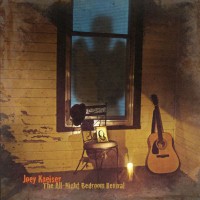 All Night Bedroom Revival is the first solo album for Kneiser and from the looks of things, fans are hoping it won’t be the last. The album is filled with beautiful acoustic and melodic tracks with heartwarming lyrics. It’s a must listen and one of the best quality free albums you’ll get anywhere.

For those who are absolute Glossary fans, then you might already have a pretty good idea of what Joey Kneiser is capable of, music-wise. For a first album, every single track echoes with Kneiser’s calming slight Southern drawl. Apart from the awesome vocals, fans know Kneiser to have some spot on songwriting skills as well. True to form, his lyrics are beautiful, heartwarming and purely reflective in some cases. From tracks like, “Adelina,” you can tell right away that this album is a true gem.

He sweeps through his acoustic guitar creating a melodic and sweet harmony that nicely blends with his expressive vocals. Other great tracks in the album include Bruised Ribs; the cover song, Paper Mills; and an acoustic version of Through the Screen Door. This last track is also available on Glossary’s new album.

All Night Bedroom Revival is definitely an album worth listening to. Easily one of the best compilations you will get under the creative commons license.