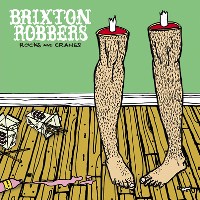 The Brixton Robbers are an energetic punk ska band from Quebec, Canada. Adding a whole lot of rock attitude to their resident sound, the group comes in loud and proud; churning in one energetic performance after another.

Rocks & Crane is the band’s first full album. It’s a bit late as it was released back in 2009 and four years after the band initially got together. They weren’t sitting idle in those four years though. The band in fact played more than 200 songs in between, apart from creating/recording tracks to be used in the record.

From the onset, you’re greeted with loud shouty vocals and fast paced drums and bass with Bright Lights. At times the song sounds like it’s trying to decide whether to be a melodic hipster number or a straight out metal rock song. Despite the ambiguity, it’s a song that blasts away, providing listeners little reaction time until the song ends.

Most of the songs are the kind that sort of shout in your face and quickly make a run for it. Tracks like Pipe Bomb incorporate some nifty guitar riff in the middle portion while O Street, practically declares war with your ear drum. Half Awake provides a more evident ska sound thanks to the deftly played bass incorporated with the song.

Perhaps my favorite in the album though is their cover of The B-52’s Rock Lobster. It’s made more special thanks to that little snippet of Peter Griffin in the beginning. The metal rock vocals adds a nice touch to the single. Definitely one to listen to if you’re checking out this record.

In the end, Rocks & Cranes is for those looking for underground rock acts to add to their playlist. Personally, the more I listen to this album, the more I end up liking the songs. Some tracks I honestly don’t like as much but there’s more good than there is bad. If you don’t mind loud, fast thumping songs, this record should be worth looking into.