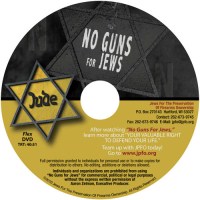 No Guns for Jews

Although No Guns for Jews might seem like an Anti-Semitic, anti-gun control rights for Jews, it’s actually quite the opposite. This 40 minute documentary tackles the importance and provides simple, but valid arguments for having a pro-gun Jewish society.

The film was produced by JPFO and features pretty stark and controversial arguments on why gun disarmament among Jews can only lead to more chaos and death.

JPFO or Jews for the Preservation of Firearms Ownership seeks to educate and inform Americans of how gun control should be abolished as well as garnering support for the Bill of Rights of every single individual. Although this Wisconsin based group was initially set up to educate Jews about how disarmament often leads to more problems instead of solutions, the group has expanded and opened their doors to welcoming anybody who seeks to learn more about their fight against gun control.

According to their site, the documentary seeks to expose the following:

The film is rather stark in its arguments, citing a lot of examples of how gun control has been used against the Jews for centuries to oppress and suppress them. No Guns for Jews took over a year in the making and is available for free download under a creative commons license.