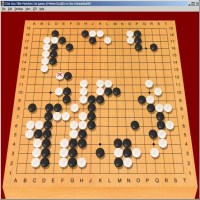 If you are fond of playing board games and want to try out something new, Panda-glGO might be the right game for you. Go is actually an ancient Japanese game which has a similar look and gameplay as Chinese checkers.

The game was developed by Pandanet Inc. The graphics is a combination of 2D and 3D and it provides you with an option to play online against another player or simply play with your computer. If you prefer to play with the computer, you have the option to choose the engine strength to make sure you get enough of a challenge when playing.

As mentioned, Go is actually an Eastern board game that has had a long history. Prince and princesses once played the game before and so far, very little, in terms of rules have changed throughout. Today, the game has gained a newfound attention with recent resurges, thanks to various anime (Japanese cartoons) and shows that feature the game.

The basic goal of the game is that black and white stones are placed on a board. The goal is to surround each other on a 19 x 19 board. Despite its simple gameplay, the near endless possibilities have definitely given various programmers a serious brainmelt. Moreover, players have to strategize their moves or else they could end up suffering for it later on in the game.

Panda-glGO is an ideal program that can be used by both beginners and advanced players alike. It is loaded with features like the capability to save SGF files as well as the capability to edit. There are also two different game tree displays, a standalone manager, and a player database among others.

As for the controls, it’s pretty basic point and click. However, you can also press CTRL + mouse movement, to rotate your board. You can also zoom in and out by pressing ALT, then + or -.

By the way, you would need to download the GnuGO engine separately in order to download the game. But don’t worry, once you try and install Panda-glGO, it will walk you through on how to do this. Also, I’m not sure whether the sound problem has been fixed but you might lose the sound altogether when you switch to the default Windows sound. If this happens, you would need a clean reinstall to get it back up and working.