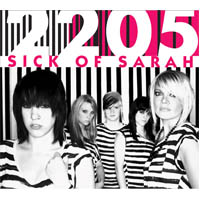 Sick of Sarah, a Minneapolis based power pop band, has recently put a version of their most recent album “2205” under Creative Commons license and on ClearBits.net. They have already accumulated almost 500k downloads by putting their album up on BitTorrent and hopefully we can double that number by promoting them on FrostWire as well.

The girls are irresistible, sharp & play hard. This is their 5th album since the band’s inception in 2005 and the free BitTorrent version available for download here contains 10 tracks, lyrics and some cool photos.
Update: Sick of Sarah’s torrent has been downloaded over 1 million times as of March 6th, 2011.

The punk rock ladies of Sick of Sarah have released their record, 2205 on Adamant Records. The album itself is infused with dirty guitars, heavy drum beats, all strung up by lyrics that beat away all “chick-rock” clichés.

Spinning off the album name from their old home and rehearsal space, Sick of Sarah welcomes you into their “home” with the release 2205.

“The women who make up this Minnesota quartet bow at the altar of riot grrls’ days gone by while simultaneously thumbing their noses at scowling chick-rock clichés. The songs are as bracing as they are familiar…. For Fans of: The Breeders, Sleater-Kinney” – SPIN MAGAZINE

“It was an absolute treat touring with SOS this year. They are fun loving, open- hearted girls who play irresistible punk infused pop music with a passion that is truly contagious… The girls are hilarious and wild, and have a charisma and chemistry that I found to be utterly charming….. I think you will too!” – Susanna Hoffs (The Bangles)

“Sick of Sarah is the real deal. This is a true working band who sing write and play for real. They are also cute and funny. They are my friends and they rock.” – Nancy Wilson (Heart)