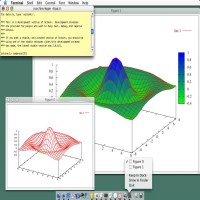 Need something to help you understand all those complicated math equations in a breeze? Octave can help you out in that department. If you think that MatLab is awesome and want a similar type of software minus the dent in your pocket, Octave is your man.

The program is the open source version of the commercial math program, MatLab. Octave easily manages to stand up to its expensive commercial counterpart. It provides an easy way for you to solve linear and non-linear mathematical problems. The program also works together with its paid counterpart so using it is a breeze if you are already familiar with the former.

The software is designed particularly for professionals although it works great even for those looking to answer a simple equation. Creation of the program started back in 1988 and was originally a part of a plan for a chemical reactor. It wasn’t until a couple of years later though when the actual program was finally developed and version 1.0 was released in 1994. It was named after a teacher from Oregon State University named, Octave Levenspiel, thanks to his amazing ability of solving quick mathematical equations.

Octave is capable of solving high-level mathematical equations. It has the capacity to work on linear algebra equations, get the roots of non-linear problems, add functions, change polynomials, differential-algebraic equations and so much more. Mere mortals might stand in awe of this program and how fast it can churn out solutions to even the most complicated math problems.

My only beef is that with all of its wonderful capacity, you can almost expect that it’s going to take a toll on your disk space. True enough, it does. Only very selected computers can bear the brunt of this supercomputing software. It can also be very complicated to master for someone who is unfamiliar with MatLab.

Although it is a wonderful program to have, it does take somewhat of a special skill to understand and work on it. Then again, who doesn’t need special skills to solve problematic math equations?