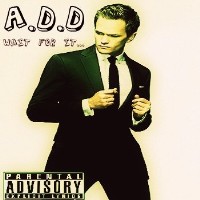 A.D.D. is an NYC duo of Amiel Cruz aka Twist and Ben Santiago aka Bennie Black, they’ve compiled a set of tracks that exude fun and engaging hip hop music.

A.D.D. is actually an acronym for “A Dynamic Duo.” They’re fairly new in the scene, having just formed back in 2011. According to their mini bio, they’re not looking to get a record deal, they just want a “team of believers” for their music.

Just Wait For It… is an independently produced compilation from the duo. The mini album features 8 cuts that range from pure hip hop rap to touches of pop and R&B.

The record starts with a smooth intro, before showing off their skills in, No Love. Produced by DJ Leeroy Jenkins and Bennie Black, the single features a semi-upbeat R&B sound. Although the song isn’t really the strongest cut in the record, there are plenty of other tracks that best represent the boys and their skills.

For instance, Dear Mary produced by Nujabes, is one of the better singles on the album. It features nice guitar work in the background and mic skills that round up the mood of the cut nicely. Run It Back, sees the boys focus more on their smooth R&B side. This one also features one of the best mic skills you’ll find on the record. If you’re going to check out one track from the album, I’d recommend this one.

Overall, Just Wait For It… isn’t as polished as you’d expect but it definitely shows off the duo’s potential. It’ll be exciting to see how their sound evolves in their succeeding releases. Check it out.

A.D.D. on BandCamp
A.D.D. on Facebook
Bennie Black on Tumblr