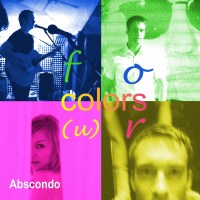 After deciding to move from Seattle to the country of Slovakia, Abscondo, started recording his first few indie pop acoustic tracks. According to the artist, his moniker not only serves as a nice artist name but it also reflects his own lifestyle.

Fo(u)r Colors is a 4 track EP that includes songs from his new and upcoming album. His first release Midnight Show is also available for free download and is quite popular in Jamendo.

After packing his bags and leaving a successful sales career in his home country, Abscondo, began his long and ongoing trek towards discovering his music and himself. The artist says that “Everything I was to do had to be a combination this and that – the best of both worlds. So I set out to determine whether it was possible to create a life that felt authentic and vibrant, one that is lived on my terms, and to do so without too much sacrifice.”

Before releasing his first solo effort, the artist was in a duo called, Sungod Abscondo, back in 2007. They released a traditional album (Imperfect People) in CD format and even invested in a promoter for the release. Unfortunately, they weren’t able to reach their target audience.  It was after this that the artist found Jamendo and sought to reach his audience through open source licensing. He has since released his album, Midnight Show and this new one, Fo(u)r Colors, under Jamendo.

Compared to the first album, this new compilation contains more upbeat tracks, yet they still come in that sweet, relaxing and emotional package that Abscondo is known for among his fans. The folk melodic blend of the acoustic guitar and the piano work is exquisite along with the heartfelt vocals.

With cuts like As for Those Insecurities and Lost in this Town, each song contemplates some quiet time; a reflection of the artist as he dissects his surrounding and his existence.

Fo(u)r Colors is a nice collection of tracks worthy of a good listen.