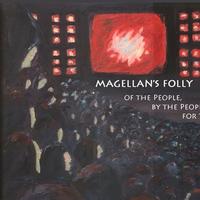 Magellan’s Folly may not be the type of band that blows you away on first listen, but they do have a certain grace and appeal to their music that makes you want to pay attention. The band’s aim is to get their message across and that is to “get people all across the world to pay attention to the world around them.” This might seem like a highly ambitious goal but then again, music is a universal language.

Hailing from Minnesota, this duo creates an acoustic indie pop sound infused with a political message. They try and capture the audiences attention with the rawness of their sound as well as the message they bring. If you’re looking for a twist in your typical indie acoustic affair, take a listen to this one.

Made up of Ronny Cary and L. Preston West, the duo both play guitars and sing vocals on the record. The album title, “Of The People, By The People, For The People” was coined from the Gettysburg Address delivered by President Abrahan Lincoln.

Opening with an acoustic piece, The Fix; the boys provide a good introduction for the listeners. The song is upbeat with nice vocal blending from the two members.  Although I’m not really a fan of the percussions, it still manages to convince you to listen. It’s a relaxing track that’s definitely easy to listen to. Much of the songs run in the same vein, upbeat and relaxing but the boys mix it up by adding a purely acoustic instrumental cut like Obfuscate, right smack in the middle of the other laid back cuts.

The best part is that each track reflects on a personal subject for the duo. For them, “freedom is an incredibly important, yet fragile thing. Our goal is to remind people of all walks of life to pay attention to the world around them. Democracy only works if everyone is active within it. Representative Democracy (which is what we have in the United States) only works if we hold our elected officials accountable for what they are doing. If we don’t pay attention, these rights and freedoms that we value so greatly will slowly erode away until we have none…”