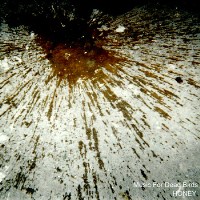 When moody, somber music is what you need for the day, take a listen to Music for Dead Birds. Their brand of quiet “anti-folk” is a great soundtrack to those dusky skies and gloomy rainy days.

The duo is made up of Jimmy Monaghan and Donald Walsh. They first got together back in 2007 and recorded various home recordings during this period. Thanks to this, they managed to win a spot to perform at the Róisín Dubh, which is a popular live music venue in Galway, Ireland.

HONEY is the band’s latest release and a compilation of all the songs that never made the final cut from their previous releases.

The band has had several compilations released in their short career so far. These include “This is what happens when fucked up people have children” (2007), Cathedrals (2008), The Day the Water Ran Out (2009), And Then it Rained for Seven Days and Black Tides Falling.

As for HONEY, the 9-track album is a hodge podge of acoustic, experimental folk. Right from the opening track, Little Angel, you get a taste of what the band sounds like. The song itself reminds me of a very folky Radiohead in their OK Computer stage. The harmonies are dreamy and makes you feel as if you’re in la-la land. It’s followed by the slightly upbeat acoustic number, Everything Looks Right. The song is carefree and laid back with a decidedly retro feel, much like a hipster Simon & Garfunkel sound.

Some of the tracks are obviously lo-fi (as expected of home recordings) but this adds to the charm of the cut. For instance, Samuel is an intriguing instrumental cut filled with acoustic bits and various little twinkly instruments. On the other hand, Life is No Exception is a spoken word sample of what seems like a narration by Stephen Hawking.

Overall, the album is definitely raw and perfect for those moments when all you want is mellow music to accompany your moody disposition.