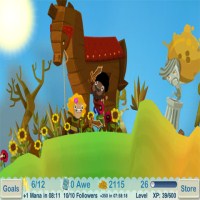 GodFinger lets you play “god” by giving you a chance to be in charge of your own world. It’s a nifty free game for the iPad, iPhone and iTouch that is quite addictive. The gameplay is similar to the Sims in which you have to create and control your characters. The goal is to gather up as many followers as possible so that plenty of people will come live in your planet.

The game is simple but fairly entertaining and very addictive. Most of the objectives unfold on real time so it gives players a chance to grow with the game. Although the idea is not new, the game’s interactive gameplay, graphics and cute little characters turn this basic game into something so much more.

Even if you won’t love it for the gameplay, there’s a big chance you’ll fall in love with the graphics when you first see it. It’s done in a funny and cartoonish way that even the simple expressions are just hilarious to watch. When played on the iPad screen, it makes the graphics pop out more. Plus, the smooth and sensitive touch screen of the device adds to fun.

In the game, you are given several goals that you must complete in order to advance. Some of these are simple while others can be a bit tricky. Some of the smaller objectives include protecting your followers by zapping skeletons using a lightning bolt. The game slowly introduces the player to various objectives and concepts. There are small rewards that wait for players every time they finish something so it’s easier to keep on going.

Completing the game does take time since you would need to wait for plenty of things to progress. One of these would be obtaining the gold. It takes time to farm them so it’s important to be patient.

The game is offered free but real money can purchase awe points which in turn can be used to buy gold, create buildings etc. It also offered players to interact with other players that have their own “planet.” You can entice them to join you or simple check out their progress.

Overall, although there have been plenty of complaints about the game having plenty of bugs, it’s still quite fun to play while we await for the next update. Download it free from iTunes.