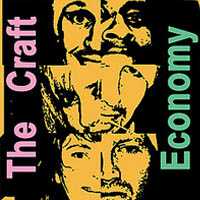 The Craft Economy: All on C

During Art Brut’s show in Toronto in late 2005, frontman Eddie Argos demanded that each and every member of the audience form a band by the time they returned. Instruments were scraped together, and The Craft Economy had their first practice the next weekend.

The Toronto based band — whose members originally hail from Guelph, Montreal, Vancouver and PEI — has a sound inspired by ’70s punk rock and ’80s new wave, and is guided by a love of tight, well-crafted and danceable pop songs.

The band’s first release, the 6-song “All On C” EP was hundred per cent DIY, right down to the hand-made lino-printed covers, and quickly sold out of its limited edition run of 200. The Craft Economy’s second release, “Is On Your Side” EP was released in December of 2008 and is available from the band at shows, over the internet, on iTunes and eMusic, and is distributed digitally using BitTorrent.

Both albums are released under a Creative Commons Noncommercial-Share Alike license, which allows the band to retain the rights to its music, while allowing fans to freely download, share and remix its songs for non-commericial purposes online. This creative approach to music distribution, as well as the band’s public opposition to Bill C-61, has garnered the attention of freedom loving people throughout the World. (…)

The ‘All On C’ EP was recorded by Jake Janzen at Purple Shag Studios in Guelph, Ontario, and mastered at Zolis Audio in June of 2007. The original pressing of the six song EP is completely sold out, but can be downloaded from [the band’s] music page. A special pressing of the ‘All On C’ EP (+2 songs from Is On Your Side EP) was produced for Pop Montreal and is available for $2 plus shipping and handling.

This album is licensed under the Creative Commons Noncommercial-Share Alike license.