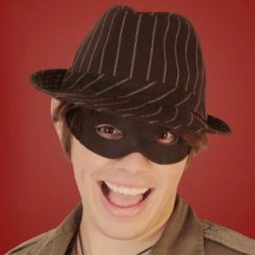 For a $200 budget, independent movie outfit, Dingoman Productions has created a funny and very entertaining film. Now, the poster might not be much to look at but trust me, this one will be worth it.

The Legend of Action Man is a 100 minute film about a guy who likes to dress up like a superhero. Everything would have been dandy if only he wasn’t the one causing so much of the problems in the first place. Think Kick-Ass minus the Hollywood costumes, special effects and budget.

Created by Derek Papa and Andy Young, the storyline was based on a short film that the duo created while they were still in high school. With more time on their hands, they’ve turned their quirky idea into a hilarious, home made film that’s worth checking out.

Like most die-hard wannabe superheroes, they’re always out there in search for the bad guys. The only problem for “Action Man” is that in his sleepy town of Sugarland, TX, there’s hardly any crime to fight. Plus, when he does set out to “help” he always ends up making everything worse. After a couple of mishaps, the authorities warn him that if he causes more trouble, he’ll be placed in house arrest.

Enter Mark, a young news intern looking for a scoop. He thinks that Action Man might be news worthy until they hear about a murder. The duo turn their sights and suspect the new millionaire, John Magnum, that just moved around the block. Will Action Man really save the day this time or is this gonna end up in a ball of flames like his previous stunts?

The Legend of Action Man might not be Hollywood flick but it gets the job done in capturing the watcher’s interest. Even though there were times when the shots got blurry and instances where the storyline was a bit confusing (it is a home made film after all) you still wanted to watch the entire thing through the end. It’s a fun and entertaining flick that’ll be worth your time.

You can stream the film online or download it. However, if you’re feeling a little generous and want to show support to the makers, you can also purchase a DVD copy of the film via Amazon. It features extras like commentaries and interviews apart from the film itself.