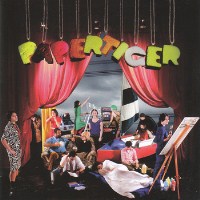 Paper Tiger is made up of two Dutch guys who have a penchant for creating upbeat, fun, acoustic indie pop songs deserving of a listen. This is the boys debut compilation and it was released under New Zealand netlabel (and home to glorious indie folk pop) Beep Beep Back The Truck Up!

Although the duo, Chris (Regtop) and Témy (Phem), have been friends since they were young; it wasn’t until the last several years and after stints in punk as well as indie bands, did they decide to pursue their passion for indie pop with Paper Tiger. Together, they write songs about mundane things in life; accompanying it with gorgeous melodies and sometimes quirky lyrics.

Everyone Here reflects the duo’s love for balance. It’s a great mix of upbeat and downbeat tracks; exuding that almost perfect balance that makes the album interesting to listen to. It gives you a little bit of everything pretty much.

Starting with the acoustic indie pop, Jolien, the song is a catchy folky ode to a lady. Although much of the song is made of acoustic guitars and laid-back pop singing, near the end portion the boys crank it up a bit giving it that rockish, alternative feel. Burn This Ship is a short middle track but probably one of my favorites in the 14-track record. The sweet guitars and whispery vocals is dreamy and perfect for a relaxing moment. It’s followed by Never Throw In a Pick-Up Line, where the boys go for a more alternative hipster sound. It’s filled with handclaps, slightly jangly guitars and catchy beats.

The rest of the songs in the record hang between acoustic folk and upbeat indie pop rock. It’s a nice little compilation to check out; an entertaining record you can put on anytime of day to make you feel good. Grab the free download over at BandCamp or help out the boys by getting a physical copy.